How To Lose Weight With Systems Thinking

Posted on September 30, 2012 by InspGuilfoyle 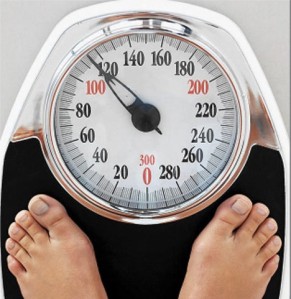 One of the key tenets of systems thinking is understanding variation.

“Life is variation. Variation there will always be, between people, in output, in service, in product”.

This applies to weight loss as much as everything else. People who are trying to lose weight often become frustrated that despite their best efforts, the scales mock them, telling them they haven’t lost any weight since they weighed themselves yesterday, or worse still, they have gained a pound or two. This can also apply when comparing one’s weight to this time last week, or any other single point in time.

That’s the problem, you see – making a comparison to one other solitary value is meaningless. This is the case for a couple of reasons:

1. You are making the comparison against a moving variable that merely captures an arbitrary point in the past.

2. The comparison does not take into account external factors that affect the data. For example, in weight loss terms, several factors can influence what the scales tell you, such as the time of day you weigh yourself, your body’s degree of water retention at that moment in time, or how recently you have eaten.

This type of comparison is called a binary comparison and it tells us nothing. The method is flimsy, meaningless and basically rubbish. Here’s what one looks like on a chart:

To establish whether there are any real trends in a set of data, the best way is to plot several data points on a control chart, such as in the one below: 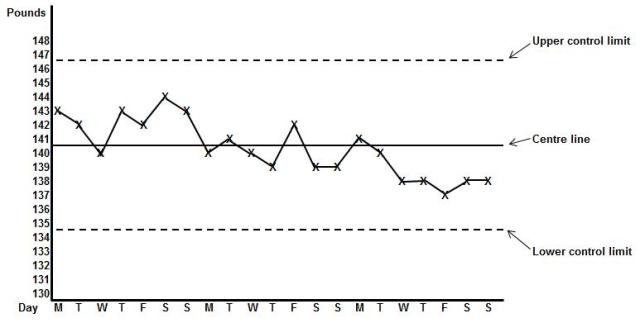 Basically, if the data points don’t fall outside of the control limits (or form any of a handful of specific patterns that I won’t bore you with), then what you see is normal variation. Normal variation is normal!! Sometimes the numbers go up; sometimes they go down. There is always a degree of fluctuation in anything – the number of red cars that drive past per hour, the crime rate, your weight.

Here it is clear to see that the person to whom the data pertain has experienced a steady rate of weight loss over a three week period. But let’s go back to the traditional binary comparison method that people tend to use when trying to establish if they are losing weight. For the first couple of days our subject would be overjoyed to discover that their weight loss programme appears to be working. Unfortunately, this would be followed by shock and disappointment that he or she suddenly gained three pounds! Whaaat??!!

Worst of all, on the sixth day of the programme, the scales indicate the person is two pounds heavier than the previous day and a pound heavier than when they started!! How cruel. Imagine their sense of frustration and disappointment. “Stupid scales!” “Waste of time!” “The diet’s not working!” Recognise any of this?

Over the next few days, our subject experiences a loss of a few more pounds and would probably feel a bit happier. Then, on the second Friday of the programme, he or she records a ‘sudden’ and ‘massive’ weight gain of three pounds. (Stupid scales, stupid programme, not fair, etc etc). And so it continues. Some days the scales bring good news; other days frustration, based on whether the numbers are slightly higher or slightly lower than the previous day, or as compared to any other given single point in the past, such as ‘this time last week’.

This demonstrates why this method of comparing data is fundamentally flawed. A steady and identifiable trend of weight loss becomes obscured by honing in on just two readings. People become unhappy and wonder what they are doing wrong. The answer is probably nothing. It’s just normal variation, so stop worrying about it. In the same way, those trying to lose weight feel elated when the scales show an apparent decrease. Don’t fool yourself though – if you’re comparing your weight to yesterday the ‘decrease’ is just probably normal variation again. In the same way – should you experience a ‘sudden’ or ‘massive’ increase, remember that it’s neither sudden nor massive. Making a judgment on two data points is always unsound. Don’t do it!

Even if you don’t know how to construct a mathematically accurate control chart with control limits, just plot your weight loss data on any old chart over time. You will see ups and downs. That’s normal. Hopefully, over time, if you are doing the right things to lose weight, you will see a steady reduction. This is impossible to see when using the binary comparison approach.

So, accept that all binary comparisons are naff and learn to understand variation instead.

I am a serving Police Inspector and systems thinker. I am passionate about doing the right thing in policing. I dislike numerical targets and unnecessary bureaucracy.
View all posts by InspGuilfoyle →
This entry was posted in Systems thinking and tagged binary comparisons, control chart, data, performance, spc, systems, systems thinking, variation. Bookmark the permalink.

24 Responses to How To Lose Weight With Systems Thinking