How To Win Any Argument

Posted on November 7, 2013 by InspGuilfoyle

There is a technique which some people seem to think is capable of winning any argument – even when faced with a compelling and well-evidenced line of reasoning. To fully appreciate the unparalleled awesomeness of this tactic, you have to see it in action; therefore I’ve chosen a pretty defensible statement (i.e. ‘Pigs can’t fly’) to demonstrate how it works. 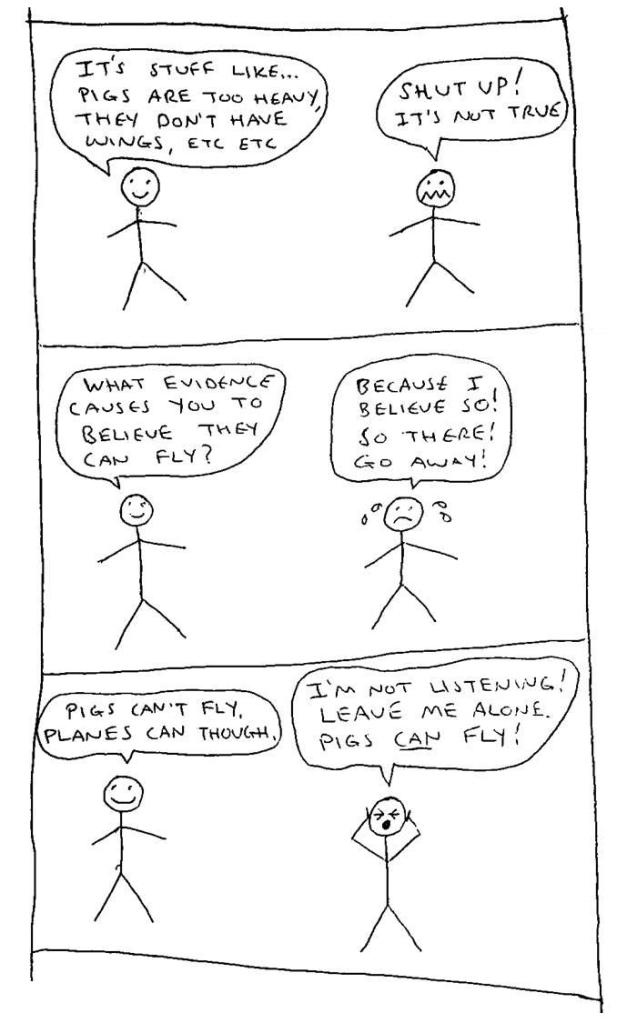 Powerful tactic, isn’t it? Why waste time relying upon actual evidence to build an argument, when you can just finish a debate by stuffing your fists in your ears, or closing your eyes until the horrible monster has gone away?

Having experienced a few of these types of interactions of late whilst debating the effect of numerical targets, I thought it would be worth laying out a few key points about my stance, and invite debate (unless you’re considering reverting to Stick Person Mode, as above).

I say: no numerical target is immune from causing dysfunctional behaviour.

I don’t say: everyone who has ever been subject to numerical targets is guaranteed to engage in dysfunctional behaviour.

There is a difference. I’ve been subject to targets but I’ve always ignored them and just gotten on with my job. The figures tend to look after themselves if you do the right thing, anyway. Pointing out that not everyone who jumps in front of a bus necessarily dies doesn’t mean it becomes a good idea to jump in front of a bus.

Okay, so let’s labour the use of the word ’cause’. Does, ‘is known to act as a catalyst’ help if I use that instead? The fact is that there’s stacks of evidence which indicates numerical targets cause / initiate / trigger / act as a catalyst for / are found at the root of… DYSFUNCTIONAL BEHAVIOUR. Okay?

“It’s not the targets’ fault – it’s the way they’re applied”.

People insist numerical targets aren’t the cause of the dysfunctional behaviour we have seen time and time again in hospitals, schools and elsewhere; that the targets are neutral and it is bad people simply choosing to engage in deviant behaviour. Sure, everyone has a choice (see 1st point), but are our public institutions stuffed full of bad, dishonest people, intent on lying and cheating because they derive a greater sense of satisfaction from attaining some arbitrary number at the expense of society? I find that hard to believe.

Targets are far from neutral. Whether you agree with them or not, they are expressly designed and intended to change behaviour.

Scandals involving dysfunctional behaviour associated with numerical targets are regularly in the news, yet when leaping to the defence of targets, people use excuses such as:

Yeah, that’ll do it too of course! I’m not saying that those other things can’t cause serious harm, am I? Take the Francis Inquiry for example – you can tick them all off the list. But targets were explicitly listed in his report as a contributory factor. So why deny it? You don’t hear people defending the other common causes of dysfunctional behaviour and catastrophic organisational failings, do you? Imagine it: ‘Leave our bullying practices alone – it’s the way the bullying was implemented that caused the problem, not the actual bullying!”

“In God we trust – all others bring data”.

This quote is attributed to W. Edwards Deming (although others lay claim to it and I can’t find the definitive source – help!) You wouldn’t come to a gun fight armed with a knife, so why do some people pontificate about targets not being responsible for causing dysfunctional behaviour when they have no evidence to support that position, particularly in the face of overwhelming evidence that they do cause it – lots of it – time and time again?

For good measure, here’s some evidence that numerical targets are responsible for loads of dysfunctional behaviour…

So… again. If anyone knows of a numerical target that isn’t arbitrary and is immune from causing dysfunctional behaviour, bring out some evidence to support a counter argument. 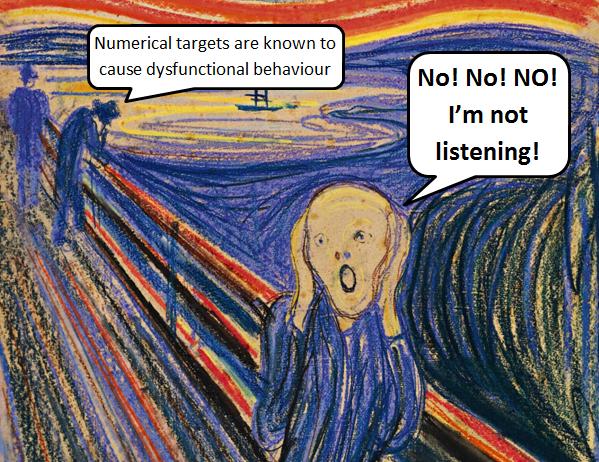 I am a serving Police Inspector and systems thinker. I am passionate about doing the right thing in policing. I dislike numerical targets and unnecessary bureaucracy.
View all posts by InspGuilfoyle →
This entry was posted in Systems thinking. Bookmark the permalink.

9 Responses to How To Win Any Argument