Posted on February 3, 2014 by InspGuilfoyle

Stick Child is a healthy little chappie and he loves a nice cold drink of milk at break time. (Do they still do those 1/3 pint bottles for 8p, with the really thin straws? Just wondered…)

Anyway, Stick Child’s usual routine is to go to the hatch in the school dinner hall when the bell rings for morning break, where he hands over his 8p (or whatever it is these days) and collects a nice cold drink of milk. Then he goes out to play with his friends.

Today, however, things were different – the milk counter was closed because the school had adopted a new system for break time milk sales. When Stick Child went into the school hall, he saw a table with a telephone on it and a sign next to it that read…

Stick Child dialled the number listed in some instructions that were next to the sign, put the phone handset to his ear, and waited to see what would happen…

Then, instead of a human saying “Hello Stick Child, how are you today?” as usual, he encountered an automated voice that said,

“Welcome to our new and more efficient way of dealing with milk-related transactions. Please select from the list of available options”.

Stick Child thought this was odd, but listened to the options, which were:

Stick Child waited for Option FOUR, which he hoped might be “Speak to a human being”, or “Buy some milk”, but it never came. This confused him, so he chose Option ONE, which he supposed was the least inaccurate of all the choices, although he didn’t really want to discuss his milk account – he just wanted some milk. To drink.

Upon pressing Option ONE, Stick Child was immediately advised by the automated voice that it would be better for everyone if he just went and used the internet in future. Then it told him to be sure to check out ‘our new range of sweets, crisps and chocolates’. Stick Child wasn’t bothered about any of those things though – he just wanted to buy some milk!

After these messages, Stick Child was put on hold for a few minutes, whilst the phone played Bruno Mars records into his ear. Every so often, Bruno’s velvet tones were interrupted by another robotic voice that advised:

“Your call is important to us and one of our operators will be with you to deal with your query as soon as possible”.

After a while, another automated voice informed Stick Child:

“We are experiencing unusually high call volumes at this time. You may wish to call back later or use our online milk information service”. 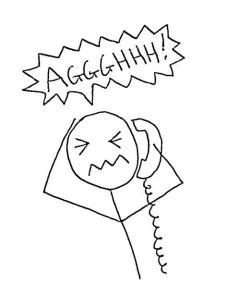 Stick Child thought it was odd that whoever had designed the new system hadn’t anticipated milk-related demand would peak at break time.

Anyway, he continued to hold, until eventually a human answered and politely informed him that he had come through to the wrong department and would have to dial the number again. This human tried to be helpful, advising Stick Child that he would need to choose Option TWO, then sub-menu Option NINE, followed by sub-sub-menu Option FORTY SIX, then ask for ‘DAVE’.

At that point, the end-of-break bell rang and poor Stick Child had to return to class, without any milk. Stick Child was disappointed. He thinks this new system is rubbish and that the old way of buying milk at break time was better for lots of reasons.

If he understands this, so can you!

In case you’re wondering what would have happened if Stick Child had managed to speak to the right person / voice recognition entity on the phone, then apparently under this new regime he would be allocated a unique reference number, which he must take to a new counter at the opposite end of the school.

There, his reference code will be checked and he will be given a token, before being sent to a third counter somewhere else, where he will hand over the token and collect his milk. The whole process is subject to rigorous service level standards at each stage and audited under a tough inspection regime, of course.

I am a serving Police Inspector and systems thinker. I am passionate about doing the right thing in policing. I dislike numerical targets and unnecessary bureaucracy.
View all posts by InspGuilfoyle →
This entry was posted in Systems thinking and tagged flow, process improvement, purpose, Stick Child, systems thinking, variety, waste. Bookmark the permalink.