Posted on December 21, 2013 by InspGuilfoyle

Recently, I had the opportunity to have a look around a railway network control room. It looked a bit like this:

Pretty impressive eh? What struck me was what a fantastic example of a system the railway network is. Think about it – all those trains having to be coordinated so as to ensure the overall system functions effectively. Train crews need to be transported around the network in time to operate other train routes; certain trains need to be in certain places at certain times to facilitate the effective running of these routes. Every part of the system depends on every other part.

On top of that, different services sometimes need to have their carriages coupled and uncoupled at particular stages of their journey to enable trains to be split and sent in different directions. The arrival of services at railway station platforms must also be coordinated, taking into account the size of available platforms and many other factors. Signalling and other equipment has to operate effectively and trains must pass through points at the right moment to prevent congestion or delays.

If an incident occurs that causes a delay, then it’s almost inevitable that there will be a knock-on effect. The challenge then is to minimise the potentially cumulative impact of such an incident. This could involve re-routing particular services, or slowing others down so that they arrive at different points at different times and in a different order to the original plan. Essentially, the result is a dynamic reconfiguration of the system’s activity, intended to minimise disruption following an unforeseen event.

This is such a great example of a system because it highlights the importance of interdependencies, with the screens in the control room visually displaying real time performance information. If one small part of the system fails, there is likely to be an impact somewhere else in the system. If a state of balance is not restored quickly, then further consequences occur as other parts of the system begin to fall out of synch. The result is an accelerating snowball effect that can cause absolute chaos (as many travellers will be aware).

Having that ‘whole system’ view is necessary to maintain an optimal balance, i.e. homeostasis. However, in many traditional organisational structures, this crucial perspective can be obscured due to silo-based models and fragmented working practices (see this blog post for more), resulting in sub-optimisation and a breakdown in cohesion. Worse than that, where counterproductive performance management practices (such as the use of arbitrary numerical targets and league tables), and superficial use of data (e.g. binary comparisons) are present, this inadvertently encourages behaviour that damages the system and destabilises the natural balance required for it to function effectively.

As a result of not understanding systemic interdependencies and clumsy use of performance data, the risk of fundamentally misguided interference by managers is heightened, leading to knee-jerk reactions and an untold cycle of damage.

Staying with the railway theme, someone recently likened this behaviour to letting a bunch of children loose in an old-style signal box, pulling on the levers randomly without understanding what the levers do – perhaps even thinking they are making a positive difference. Meanwhile, the wrong points are being opened and closed, trains are being sent in the wrong direction, and maybe some are even crashing into each other, far away down the line where the consequences cannot be seen from the signal box. 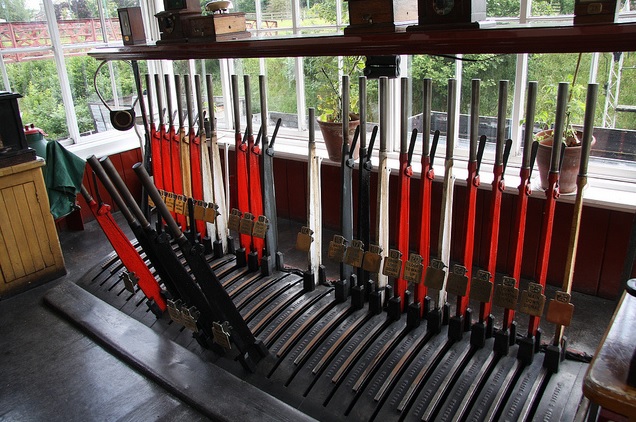 The question is this:

“Which approach to managing the system is dominant in your organisation?”

I am a serving Police Inspector and systems thinker. I am passionate about doing the right thing in policing. I dislike numerical targets and unnecessary bureaucracy.
View all posts by InspGuilfoyle →
This entry was posted in Systems thinking and tagged management, performance management, systems, systems thinking. Bookmark the permalink.

8 Responses to The Railway Children