Crime rates are not the definer of effective police performance; they merely provide information about criminal activity.

What do I mean by this?

Well, we’ve been so used to judging police performance based on whether crime is higher or lower than some previous point in the past (binary comparisons), positions in league tables, or variance from arbitrary numerical targets, that it’s easy to miss the obvious question about whether we’re measuring the right thing in the first place. Even when crime trends are shown in time series format (e.g. control charts), I’d argue that it’s still a case of measuring the wrong things (albeit in the ‘right’ way) if the intention is to assess police performance.

(One of these measures is actually real, silly though this may sound).

I’m not saying these datasets are useless for helping these people understand their business (they’d certainly be useful for understanding demand and maybe assisting future planning), but they are not measures of performance. In the policing context, yes of course we want to reduce crime (Peel talked about it, didn’t he?) and we should take reasonable steps to prevent it, but we need to move beyond the simplistic narrative of:

It’s also necessary to acknowledge that multiple variables affect crime rates; factors such as economic cycles, substance abuse, the weather, societal influences, changes in legislation, and so on. None of these are directly within the gift of the police to influence. Also, what about where the police cause an increase in reported crime by having the temerity to find someone carrying a weapon? Surely proactive problem-solving should not be discouraged on the basis that finding hitherto unreported criminal offences is incongruous with an over-simplified crime reduction narrative. 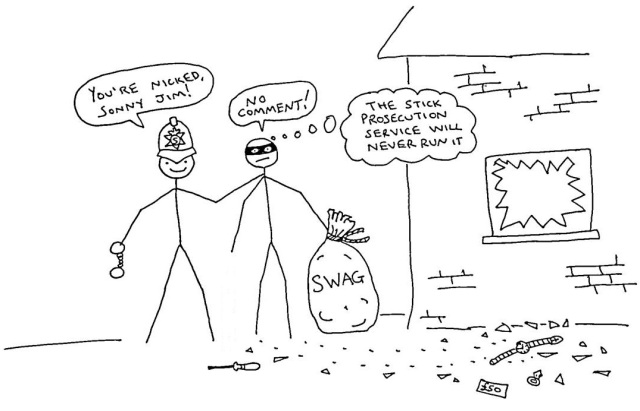 At the local level, if Stick Burglar is arrested and jailed, and burglaries suddenly stop, it’s probably fair to assume that the police directly affected that particular crime series. Conversely, at force or national levels, if crime happens to go up or down a bit, it’s likely to be as a result of the plethora of external factors that influence the crime rate (as well as normal variation).

It’s time for a shift in thinking about crime rates and police performance. By removing perverse incentives for mis-recording crime, we are hopefully left with a clearer picture of criminal activity. Such data can then act as extremely useful sources of information that assist decision making about how best to tackle reported crime.

But it’s not ‘performance’ data.

In the same way, the AA should not be held accountable for a vehicle breaking down; neither should the fire service be blamed if an electrical fault causes it to catch fire. There may be opportunities to learn about causes and respond to future patterns of demand (where it’s predictable), but that’s all.

Therefore, it doesn’t seem logical to directly equate police effectiveness with crime levels, especially as the true extent of crime is unknown, and what is known is affected by a multitude of factors.

Reported crime, from whatever source, is potentially useful information about criminal activity.

I am a serving Police Inspector and systems thinker. I am passionate about doing the right thing in policing. I dislike numerical targets and unnecessary bureaucracy.
View all posts by InspGuilfoyle →
This entry was posted in Systems thinking and tagged crime, decision making, measures, performance management, police, Stick Child, systems thinking. Bookmark the permalink.