Posted on September 11, 2015 by InspGuilfoyle

Watching the TV programme ‘The Force’ last night (which follows the work of officers from Greater Manchester Police), I thought of yet another analogy to help explain why binary comparisons are rubbish. (Yes, I know I go on about this, but there are still people out there who appear to be ‘hard of learning’ when it comes to this subject).

Anyway, the episode featured the policing of a protest by the English Defence League, including sequences from a state-of-the-art control room where the officer in charge was able to watch events unfolding on banks of CCTV screens. This meant he was able to make decisions dynamically in response to changing events and fresh information, as it came in. 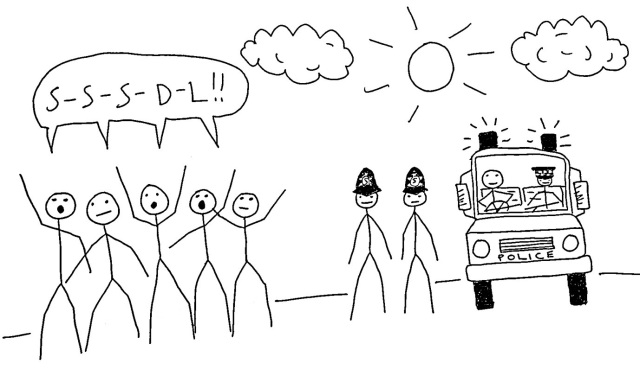 Using the inevitable #StickPeople to contrive a tenuous link to the use of binary comparisons, here we can see the police boss running an operation to prevent disorder involving the fringe ‘S.D.L.’ (Stick Defence League) – an angry and directionless group who sometimes cause problems at their own events for no apparent reason.* 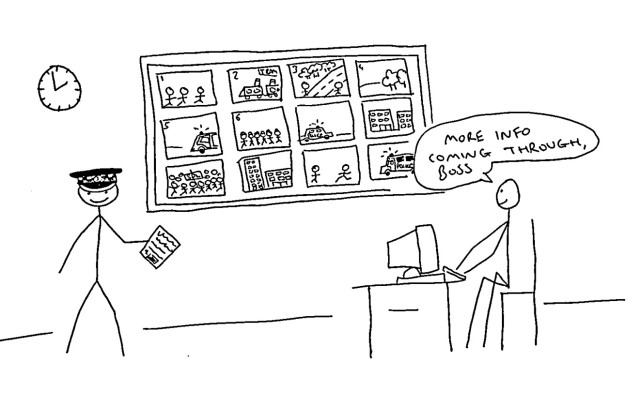 The boss uses the live footage from the CCTV screens, radio messages and other incoming information to make decisions about what to do, and the event passes off peacefully. Everyone’s happy. This is because all he’s doing is the equivalent of using meaningful and multifaceted performance information to understand what’s occurring over time, so informed decisions can be made about how to respond (or not respond).

Contrast this with the situation below, where the real time information is switched off and all he has to go on are occasional isolated ‘freeze frames’.

It’s pretty obvious really, but the latter case is equivalent to using binary comparisons, where isolated numbers are compared to ‘the same period last year’ etc.

Why anyone still does this is beyond me.

* Disclaimer: This blog is just a bit of light-hearted fun. The ‘SDL’ are entirely fictitious and even if they were weren’t, they would have the right to protest peacefully. Any similarity to anything else, ever, is purely coincidental. And binary comparisons are still rubbish.

I am a serving Police Inspector and systems thinker. I am passionate about doing the right thing in policing. I dislike numerical targets and unnecessary bureaucracy.
View all posts by InspGuilfoyle →
This entry was posted in Systems thinking and tagged binary comparisons, decision making, performance management, police, Stick Child, systems thinking. Bookmark the permalink.