Posted on February 23, 2013 by InspGuilfoyle

Right, hopefully the title will have drawn you in (I’ve fallen for it myself three times whilst writing this blog post). If you stay to the end you’ll see the reason for it anyway. Unfortunately this time I’m not going to dazzle you with my rudimentary childlike drawings, but as usual there’s a (very badly) ‘hidden’ systems message.

Deming talked about how about 94% of performance is down to the system and only about 6% attributed to the people in it. This might fly in the face of conventional thinking, but let me give you an example of why it’s true. I’m a fast(ish) police response driver. I drive as quickly and safely as I can to emergencies to help people and catch baddies. Performance targets for response times mean nothing to me because they change nothing about how I drive. If I or other police response drivers don’t get there within the target time it’s usually due to systems conditions outside of our control, such as the proximity of resources, amount of resources, road conditions, traffic conditions, weather and so on. Systems conditions. 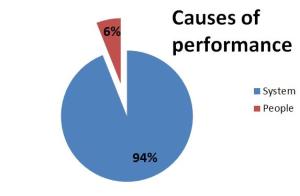 Yet most performance management focuses on the individual. “Why did Team ‘A’ fail to get to three Grade 1 jobs (or immediates / whatever you know them as) yesterday?” It’s that ‘WHO’s to blame?’ mentality again. It MUST be a ‘person problem’! Well perhaps the police station is at the wrong end of the division. Maybe there aren’t enough bobbies on response to meet predictable demand. Perhaps an unhelpful deployment policy or lack of vehicles stops them from deploying effectively. Chances are, it’s a systems condition.

Therefore, in these circumstances it’s a waste of time blaming individuals. I refer you to the pie chart (which is shamelessly ‘borrowed’ from this excellent blog post by Think Purpose. The precise percentages aren’t worth arguing about, either – the principle is solid). The system is always responsible for the majority of performance.

Okay, so this brings us to the ‘free beer’. Thanks for staying with me and enduring the systems bit. Here’s the everyday story that makes the point… 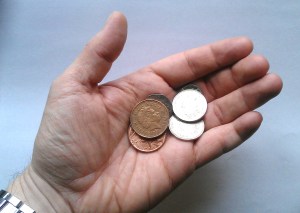 I went to the shop last night and bought some non-specific beer-type drink that might or might not begin with the same first three letters as my surname. As I left the shop I had a bad feeling that I’d been overcharged. Even my GCSE-level maths instinct alerted me to check my change, and Lo-and-Behold – I found I was £1.50 out of pocket. (You might laugh but that’s serious money to me these days; it could buy 15 blog views to help game my own performance framework for a start).

Anyway, I went back in and spoke to the first person I encountered behind the till, who happened to be the shop manager. Even before speaking to her, I’d guessed it was a ‘systems problem’, but when I told her I’d been overcharged, her immediate reaction was that the girl behind the other till must have made a mistake ‘because she’s new’. (The poor girl was within earshot as well. Bad skills!) I suggested it was unlikely that it was her fault as all she had done was scan the items and charge me at whatever rate the till had come up with, so the manager went and fetched a can of the same brand of, um, ‘health drink’, and scanned it. Guess what? The machine registered the wrong amount. Machine error, not human error. So much for technology.

In any case, the silver lining in this situation was not only did I get my £1.50 back, but the manager gave me an extra can of the black stuff for free; hence the name of the post. (I reckon her employee deserved two though).

Lessons? Well, it goes back to the point about assumptions. It disappointed me that the manager’s immediate reaction was that her staff member must have had screwed up, rather than the system (see my blog post ‘Potted!’ for a similar story). What does that say about the dominant type of management thinking when it comes to judging performance or attributing blame?

Remember, the greatest opportunities for improving performance lie in the system, not the individual. If you want faster response times, safer hospitals, better service and happier customers, the best way to achieve it is through building an effective system, not leaning on the workers or blaming them when something goes wrong.

It also saves on payouts for errors or poor service – even if this is only the cost of one can.

I am a serving Police Inspector and systems thinker. I am passionate about doing the right thing in policing. I dislike numerical targets and unnecessary bureaucracy.
View all posts by InspGuilfoyle →
This entry was posted in Systems thinking and tagged assumptions, deming, management, performance management, systems thinking. Bookmark the permalink.