Posted on February 10, 2013 by InspGuilfoyle 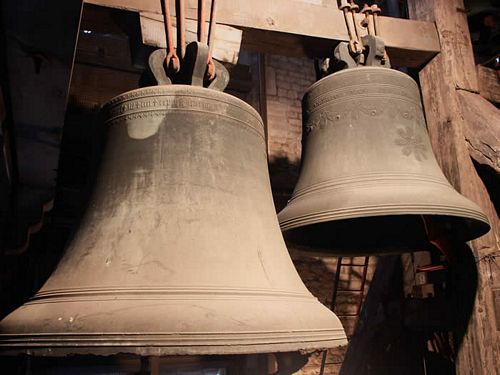 “About half of everything is below average”.

When you think about that, it’s pretty obvious isn’t it? Well keep that thought in mind as we explore a widely misapplied and misunderstood tool of performance management – The Bell Curve.

Without even attempting to get into the impenetrable mathematics behind probability theory and distribution curves (mainly because they go above my head), suffice to say that in simple terms, if you plot a range of values you often get a shape known as a bell curve. Here’s an example below. (No sniggering at the back!) 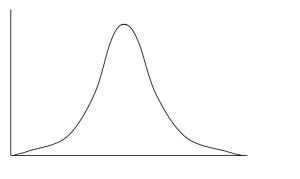 Essentially, the most frequently-occurring values tend to be grouped towards the middle. So, if we were plotting the IQ of 1,000 people in a room, there would be a few with very low IQs (left hand tail of the curve), a few with very high IQs (right hand tail of the curve), with the bulk of people being grouped towards the middle. This causes the distinctive hump that indicates normal distribution. As the name suggests, this is NORMAL…

Pay attention, anyone who might be about to use bell curves to rank their staff!

Now I’d be punching above my weight if I pretended to understand the algebraic formulae involved in constructing these things, but I think the bell curve conveys a pretty clear image that even the untrained eye can interpret, whether or not you have a Nobel Prize for mathematics. 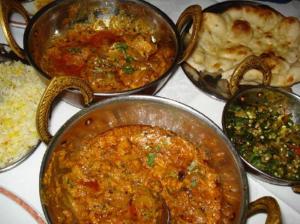 Nevertheless, some managers think it is a good idea to use bell curves as a performance management tool, seemingly hoping to get everyone above average. Ha! Well guess what, if performance is assessed relative to peers then some poor so-and-so is always going to be at the bottom. This is regardless of how good their actual performance is. If someone was assessing my ability at making curries against my neighbours, I reckon I’d come out pretty well, whereas if you pitted me against Madhur Jaffrey or my good friend Faz, I’d be that sorry loser stuck in the left hand tail of the bell curve. This is because assessing performance relative to peers is the same as benchmarking against a moving object, like a bus.

Pitting people against each other has emotional and psychological consequences too. Being branded a failure, marginalised or made to feel inferior comes with the territory and makes Joy in Work (Deming) impossible. Recent research into performance management by Professor Phil Taylor of the University of Strathclyde noted the pointed inferences that go hand-in-hand with the use of bell curves, such as:

“You have not achieved. You are an underachiever”.

Brilliant for morale and self-esteem, isn’t it?

In addition to the sense of abject failure associated with being last in the sports day egg and spoon race (or having the least number of arrests etc), ranking of individuals always causes an even more toxic side effect – unhealthy internalised competition. This is where effort and ingenuity are turned inward to get ahead of colleagues and avoid being last amongst equals. The result is that focus towards purpose becomes distorted and team spirit is destroyed, as individuals concentrate on their own performance at the expense of the overall system.

As you know, an effective system relies on its components working together to achieve its overall aim for the customer or service user. Pitting individuals, teams or departments against each other defeats this object, leading to sub optimisation, waste and worse performance.

Forced distribution intensifies the dysfunctional behaviour associated with managers using bell curves as a performance management tool – this is where a predetermined proportion of people will be singled out as a result of being in the bottom 10% or whatever. This is seen in the example below. There’s always going to be a bottom 10% isn’t there? 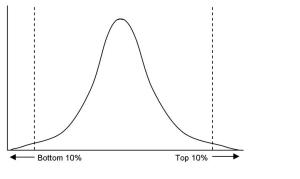 Now, if sanctions for ‘poor performance’ come as part of the package, you can guarantee things will get worse. Who wants to be on an action plan or the subject of critical management scrutiny? Likewise, at the other end of the scale, if incentives are introduced into the mix (such as performance-related pay) this further intensifies the bad stuff. In the same way as with numerical targets, this particularly counterproductive device of performance management always causes gaming, cheating and other dysfunctional behaviour.

Another major weakness is that, in the same way as those useless tables of numbers often used to judge performance, a single bell curve is nothing more than a snapshot of that moment in time. It’s likely that people will have changed position next time the music stops, or whenever another bell curve is drawn. Roll up! Roll up! Spin the wheel and you get different results every time! Such comparison against moving variables always produces unstable results. Therefore, it is impossible to see any trends or glean anything useful about performance that aids managers understand and improve how their system is operating.

On top of that, consider the limitations of what gets measured. If a limited number of inputs or outputs are counted (such as number of arrests, detected offences and intelligence submissions) then people will be incentivised to produce whatever it is that their bosses are measuring. What gets measured gets done, after all. Furthermore, how do you incorporate ‘valuable-but-difficult-to-measure’ activity into such a performance regime, such as comforting Mrs Miggins when she got lost in the town centre, or standing on a crime scene for hours?

In summary, the use of bell curves in performance management is based on defective assumptions about behaviour, ignores relativity, attempts to outflank the law of averages, causes dysfunctional behaviour, creates waste, demoralises staff, is incapable of identifying trends or anything useful about actual system performance, generates unhealthy competition, obscures purpose, disregards important but-difficult-to-measure activities, breaks down the critical interdependencies that the system thrives upon, and makes performance worse. What’s to like?

Using bell curves as a performance management tool is a classic example of ‘Wrong Measures, Measured Wrong’. Don’t do it! Keep this monster locked in the tower.

I am a serving Police Inspector and systems thinker. I am passionate about doing the right thing in policing. I dislike numerical targets and unnecessary bureaucracy.
View all posts by InspGuilfoyle →
This entry was posted in Systems thinking and tagged bell curve, charts, command and control, data, management, performance management, systems thinking, variety. Bookmark the permalink.